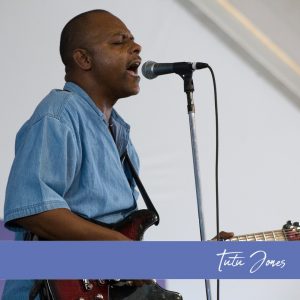 The son of Dallas-based R&B guitarist Johnny B. Jones, “Tutu” Jones was truly a product of his environment — growing up in a house frequently populated by guests including Freddie King, Little Joe Blue and Ernie Johnson, his own future as a bluesman was never in doubt. Born John Jones Jr. on September 9, 1966 in South Dallas, Texas. As a child, Tutu was constantly surrounded by blues luminaries such as Ernie Johnson, Little Joe Blue, and even Jones’ uncle L.C. Clark who was a fine guitar player in his own right. Tutu grew up steeped in in-house jam sessions of truly stellar quality. He was 4 ½ years old when he first began his musical career as a drummer. “Next thing I know, I’m playin’ drums in some club in Southeast Dallas,” says Tutu. Jones turned pro with R.L. Griffin, with whose band Tutu took on the road. He became a professional drummer while still a teen, backing his uncles Curly “Barefoot” Miller and L.C. Clark before moving on to work with the likes of Z.Z. Hill and R.L. Burnside. His life became a dizzying mélange of tours and Texas dates, hiring out as drummer for Z.Z. Hill, Al “TNT” Braggs, Ernie Johnson, and Little Joe Blue.

One night, Tutu was fooling around with Joe Blue’s guitar backstage at a gig in the part of Dallas called Oak Cliff (turf to T-Bone Walker and more recently, the Vaughn Brothers). Joe Blue told him, if he could play guitar that well he should be fronting his own band. Not long after, Tutu started showing up at the myriad blues jams in the clubs in North Dallas. Joe Blue’s advice had been good, and things started happening for Tutu Jones. As Jones steadily honed his guitar and songwriting skills, he eventually began fronting bands of his own; he cut his solo debut “I’m for Real” in 1994, followed by “Blue Texas Soul” in 1996. Two years later, he released “Staying Power”.

Tutu is more than the sum of his influences (though distinguished influences they are!) He is first and foremost an individualist, who puts a very personal stamp on every note that he plays and every syllable that he sings. You could call him the living personification of the sound of South Dallas, where Blues and Soul meet and are stronger for it.

Tutu Jones has released a red hot CD aptly titled “Tutu Jones Live”. This CD contains what many of the critics have called “One of the hottest live Blues to be released in quite some time”. Tutu is truly one of our brightest stars in the future of the blues in the 21st Century.