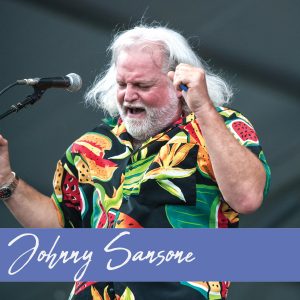 Johnny Sansone started out early playing music. His father, a saxophonist who’d been in Dave Brubeck’s band during World War II, introduced him to the saxophone at age 8. Johnny picked up the guitar and harmonica by the time he was 10, and had a life changing experience at 12 when he saw a Howlin’ Wolf show in Florida. That was the moment the young Sansone knew he was destined to play the blues as his lifetime vocation. He sat in with Honeyboy Edwards at 13. During the 1970s Sansone studied with blues harmonica legends James Cotton and Jr. Wells. In the 1980s he toured with Ronnie Earl, John Lee Hooker, Jimmy Rodgers and Robert Lockwood Jr.

Sansone led the life of an itinerant bluesman, traveling around the country from temporary bases in Colorado, Austin, Florida and Chicago before settling down in New Orleans in 1990. As leader of Jumpin’ Johnny & the Blues Party, Sansone played harmonica and guitar in the fierce Mississippi delta blues style heard on his 1987 debut Where Y’at? and his1991 release Mister Good Thing.

Living in New Orleans brought a swamp rock tinge to his gruff vocals and emotional playing style, and after attending a wake for Zydeco pioneer Clifton Chenier Sansone started playing accordion as well. By the time of 1996’s Crescent City Moon Sansone had developed into a full fledged Louisiana artist, combining blues, boogie and the frontporch Cajun and Zydeco sounds of the Louisiana bayou country.

Crescent City Moon won multiple Best of the Beat awards that year and Sansone was signed to Rounder Records’ Bullseye Blues subsidiary, which also released his 1999 followup Watermelon Patch. During the early ‘00s Sansone played in a variety of settings, including a trio with pianist Joe Krown and guitarist John Fohl which released a recording in 2004.

At the beginning of 2005 Sansone joined the Voice of the Wetlands Allstars, a group of Louisiana bandleaders who wanted to draw attention to the disappearing wetlands and the destruction of the Louisiana coastline. By the time the record was released later that year New Orleans was underwater – the city flooded when its levee system broke down under the onslaught of the flood surge accompanying hurricane Katrina. “The record was designed to be a warning about what might happen,” said Sansone.

“Then it became a matter of I-told-you-so.”

Sansone was forced from his home when New Orleans was depopulated in the months after the flood and went on tour with the Voice of the Wetlands Allstars. He developed a lasting friendship with fellow VOW member Anders Osborne and began writing great songs about the Louisiana experience tempered by the emotions of watching the city being destroyed and slowly returning to life. Osborne produced Sansone’s next album, the 2007 release Poor Man’s Paradise. Sansone reached a new level of songwriting skills on this record, and the title track became a staple of the Voice of the Wetlands live performances.

In 2009 Sansone formed an acoustic trio with Osborne and guitarist John Fohl. The idea was they would play a regular Tuesday night show at Chickie Wah Wah to work on new songs. It was an explosive period of creativity for Osborne, who developed the songs on his masterful American Patchwork album during these sessions. But it was also a time of creative breakthroughs for Sansone, who wrote the breathtaking blues “The Lord Is Waiting and the Devil is Too” during these sessions. That song became the title track of his next album, another Osborne-produced venture. To this day it’s hard for Sansone to get through a gig without a fan calling out for “that Devil song!” “The Lord Is Waiting and the Devil is too” was named Song of the Year at the Blues Music Awards.

Sansone continued to pen his unique brand of Louisiana story songs on his next album, Once It gets Started, which featured a memorable account of the fire that destroyed the Hubig’s Pie factory, “The Night the Pie Factory Burned Down.” His latest release, Lady On the Levee, another Osborne production, this time featuring Fohl as well as Jefferey Bridges on bass, Rob Lee on drums, Joe Cabral on baritone saxophone and Ivan Neville on keyboards.

The album rocks with the powerful boogie of “OZ Radio,” a tribute to New Orleans roots music radio station WWOZ. Sansone’s howling, rip-through-the-plaster voice and deep grooved harmonica riffs are the main attractions, but hard core fans will appreciate the wit and wisdom of his character songs, Louisiana stories like the title track, “Gertrude’s Property Line” and “One Of Us,” (“he ain’t no tourist attraction/he’s one of us”). This is Sansone’s most personal album as well. You can hear him struggling with some deep emotions on songs like “I’m Still Here” “Lightning Bug Rhodes” and “Tomato Wine.”